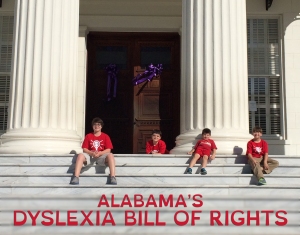 January 2013 Decoding Dyslexia of Alabama was established to voice the concerns of parents on the limited access to educational interventions for #dyslexia in Alabama and to work towards legislation. October 2014 Roundtable Solutions committed to our goals. November 2014 ALIDA came on board and most recently Alabama Game Changers along with Alabama Scottish Rite Foundation.

This Dyslexia Law will: